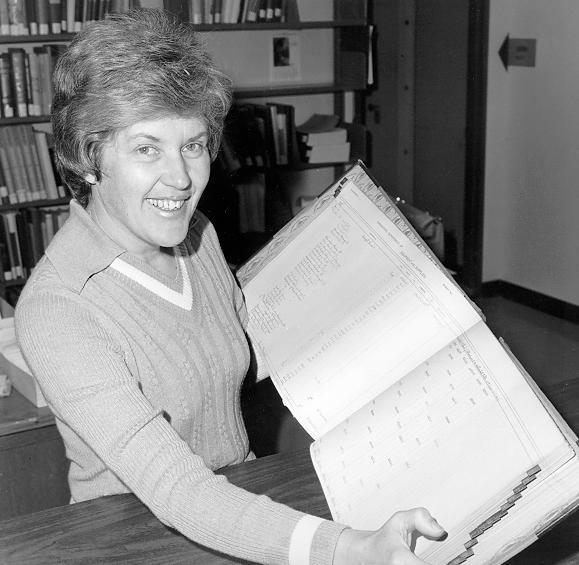 Archivists are a wonderfully peculiar, yet intensely passionate little bunch of professionals. I have never met an archivist who turns the lights off in the office and completely leaves work inside those walls. There is always something on their minds, something nibbling at them as they drive home, as they wash dishes. Being an archivist is, of course, a way that people make a living. But it is also a profession that attracts passion. Archivists do what they do because they have to, deep down. They have an urge to preserve and to celebrate the past in its own words. They have a drive to bring context to the past, to help people understand where they came from and how the world has come to be the way it is.

Passion is what drove Laurenda Daniells to continue her work following what she calls “an escape from fleas.” Laurenda was appointed as the University of British Columbia’s first University Archivist in 1970. She describes her time in this position (albeit quite briefly) in her memoir “Royal Blood,” which was recently published by Paper Trail Publishing in Vancouver. Archivists will enjoy reading about her first day on the job:

Archivists will identify with the excitement felt when a holdout donor finally calls up and asks for you to accept the transfer of records. They will also identify with how a records pick-up can go horribly wrong!

“They are really really old and we don’t want them. Could you keep them for us?” I felt a moment of triumph. The Bursar’s Office had been one of my holdouts, and I was very happy to realize that they had come to me in their moment of need…Flashlight in hand, I turned the key and stepped into the dark, dank space. A nasty smell assaulted my nostrils and as I shone my light around in search of the electric switch, I realised that the university’s many feral cats had used this place to bring their bird victims. Feathers and bones were lying on the floor, and the basement had the air of a charnel house…I swept my light around the walls and saw, sure enough, boxes and boxes of papers. A quick peek showed me that they were well worth bringing in, though the smell of decaying paper in addition to the old bones and feathers made me feel slightly nauseated. Suddenly I felt a strange sensation on my legs. It was as though something alive was creeping up them. I brushed my hand over one knee and the same sensation came over my hand. There was a sharp biting feeling as well and I pointed my light down to see the cause. Oh God, my legs were black, as was my hand, with a cloud of fleas. I screamed and dropped the flashlight and ran for the door.”

Passion is the only way you go back to work after that!

Passion drives people to accomplish incredible things, things that might seem completely crazy to others. Passion drives Levi Bettwieser, founder of the Rescued Film Project. His journey began when he discovered over 1200 rolls of unprocessed film shot by a single photographer in the 1950s.

Passion is what keeps Levi processing in his kitchen for hours. It’s what keeps him pouring over rolls of negatives that may well be un-salvageable. The images are locked away and they have never been seen before. He feels a responsibility to connect with the photographer that shot the images or members of their family. He seeks to find the best way to document these photographs and give them life. As he describes it, he gets to enjoy these moments for the people that were never able to enjoy them for themselves. What an incredible project!

For archivists, passion is connected to the excitement of possible discovery. We get addicted to that feeling when you find the missing piece of evidence you need to understand a moment in the past. An unopened box is an undiscovered world of possibility. How could you not keep coming back for that?

Shivendra Singh Dungarpur learned about the devastating fate of the majority of India’s film heritage when he made his documentary, Celluloid Man, about PK Nair, India’s celebrated film archivist. He was troubled to learn that of the 1700 silent films made in India, only 10 incomplete films survive. He felt that he had to do something about this, so he began delivering a series of film preservation and restoration workshops. He hopes that as awareness grows, more producers will build in preservation costs into their production budgets. In an interview with the Times of India, Dungarpur explains how he has partnered with the National Film Archive of India for the workshops to ensure that there is a united front against the loss of India’s film heritage. His passion for film and for the history of film in India drives him to find ways to stop the monumental loss and encourage filmmakers to preserve their work for future generations.

When I think of passionate and dedicated archivists in Canada, the first that comes to mind is Ry Moran. He has worked tirelessly to promote reconciliation with Canada’s indigenous peoples. As the Director of the National Centre for Truth and Reconciliation, Moran has taken on the important work to preserve the records and the memories of survivors of residential schools in order to educate Canadians and help to guide this journey to reconciliation by ensuring this devastating past is never forgotten. He knows better than most that this work requires energy and time and it requires passion and dedication.

Keepers of the Secrets

Behind databases, headlines, chapters, reports, artwork…there’s a passionate archivist. Archivists are proto-Google, there to guide people to the records they require. Behind our access mandate is the passion for discovery, the passion for preservation, the passion for knowledge. Here is one of the best descriptions of what we do: Keepers of the Secrets

I feel privileged to count myself among this motivated, passionate group of people. If you know of a passionate archivist who should be celebrated – I would love to know about her or him. Get in touch! I would love to have a regular series of posts about the work of specific archivists.