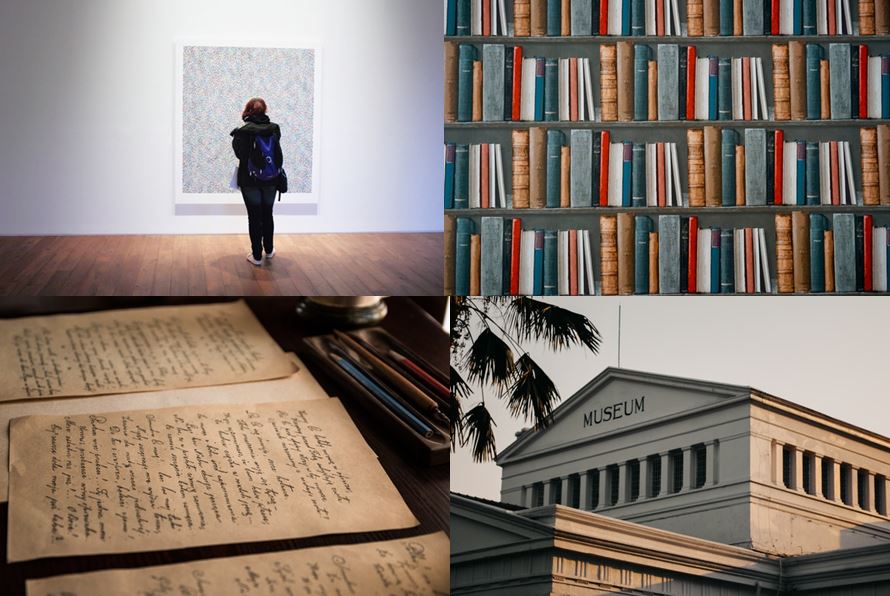 Another year, another opportunity for GLAM puns! While only one presenter at this year’s BC GLAM Symposium used an image of a GLAM rocker, we were all feeling GLAM-orous as members of the British Columbia gallery, library, archives, and museums communities gathered to discuss how our respective fields align and how we might find commonalities and collaborative opportunities. This was the second incarnation of the symposium and this year, I feel like the event really found its feet. This year’s theme was “Here and Now: Practical Ideas, Local Solutions.”

The day opened with a powerful presentation from Dr. Andrea Walsh who introduced us to her long-standing efforts to repatriate residential school artwork. Between 1958 and 1960, artist Robert Aller volunteered to teach art classes at the Alberni Indian Residential School (IRS). His collection of 700 children’s paintings was donated to the University of Victoria in 2008. Believing that “reconciliation cannot come from policy but from a commitment from individuals,” Dr. Walsh secured agreement from the University to return the artworks to the survivors who painted them.

Networks were mobilized to find the artists themselves or their relatives. Special ceremonies were held in some cases to celebrate the return of the works. For others, the paintings were painful, triggering reminders of time spent at the IRS. Each artist was presented with a framed reproduction of their piece and was given control of their work. The wishes of the artists were respected. Some survivors chose to place the artwork with the University, while others chose to destroy it.

Dr. Walsh explained that it was important to make a distinction between “donating” and “placing.” She felt that it was critical that there be no proprietary language accompanying those pieces that survivors chose to place with the University. This was guided by the principle that “we don’t keep other people’s stuff without their permission.” The University has provided space rather than taking ownership of the pieces and they have signed agreements of care rather than deeds of gift. This is a fundamental shift in a collecting mindset and Dr. Walsh believes this shift is crucial for meaningful reconciliation. You can read more about the project here.

With the express permission of the survivors, a number of pieces were placed on permanent display in the History Hall at Canada’s History Museum in Gatineau, Quebec. The artwork has also been the subject of a number of exhibits over the years in several locations around the province.

A New Vision for Cultural Spaces

Following the powerful and thought-provoking keynote from Dr. Walsh, the group heard from Liane Davison (Surrey Art Gallery) and Peter Tulumello (Township of Langley) about ambitious projects in their respective municipalities.

Liane Davison introduced us to the proposed Clayton Community Centre, which will integrate library services, recreation, art, and parks. Davison explained that the key to this project was “integration” as opposed to “co-location” and this shift in thinking has been central to the entire design of the project. The City of Surrey broke ground on the building in July 2018 and the intention is for the facility to become the largest certified passive house in Canada. More information about the Clayton project can be found here.

Peter Tulumello provided an overview of the project in the Township of Langley to create an all inclusive GLAM centre in partnership with Kwantlen First Nation. The Centre will include a community archives, an indigenous repository, a museum space, a presentation theatre, a print-making studio, and an art gallery in addition to a reception hall, office space, collections storage, a theatre, a rooftop garden, and a cafe. I am looking forward to seeing the results of this ambitious project.

A popular feature of the GLAM symposium in 2018 was the GLAM Slam, and so it was again this year. Eleven presenters each had five minutes to present their idea in a succinct and entertaining way.

Heidi Schiller (Burnaby Public Library) introduced us to informative walking tours offered in Burnaby; Carolyn Casenas (Surrey Library) discussed the engagement of the Filipino community in Surrey; and Babs Kelly (BC Library Trustee Association) talked about the #ProudTrustee movement that celebrates the incredible work of local libraries in BC.

I introduced the group to the new City of Coquitlam Archives and noted that I had used an idea from last year’s GLAM Slam to have green screens at our Grand Opening in January.

Christina deCastell (Vancouver Public Library) walked us through the difficulties of building an exhibit for a space that doesn’t exist. Morph! “explores the idea of how individuals can drive local changes that cascade into large-scale social transformation.”

Genevieve Weber (BC Archives) discussed Indigenous Data Governance and the fact that indigenous peoples have a disproportionate amount of information gathered about them and they have not historically had control over this data. BC Archives is exploring how it might facilitate the work that is being done around data governance. More information about BC First Nations Data Governance is available here.

Catherine Ouellet-Martin (Beaty Biodiversity Museum) invited us to explore the Beaty Boxes – a series of interactive outreach kits that include touchable specimens with handling instructions, information about UBC research scientists, and hands-on activities.

Lauren MacLean (Legislature Library) discussed the new MLA Papers Archive, which has half a million items. Lauren has been busy establishing acquisition policies, storage solutions, and digital preservation, all the while feeling like the “grim reaper for politicians.” Don’t worry, a visit from Lauren does not mean your political career is over!

Finally, Dan Sifton presented the newly re-branded suite of services that is DigitalBC (formerly BC Digital Library). More info can be found here.

May the force be with…Scott Hargrove

The closing keynote was a futuristic and slightly disturbing talk from Scott Hargrove (CEO, Fraser Valley Regional Library) that previewed some technologies that may seem like something out of science fiction but are all too real and are coming to a library near you. Hargrove introduced the group to robot librarians, augmented reality apps to overlay the present and the past, and AI-created musical compositions. An avid Star Wars enthusiast, Hargrove welcomes the technologies of the future and encourages the GLAM sector to embrace technology that can “spark imagination and support original thought.” I was creeped out by the robots but I take your point, Scott.

Many thanks to the organizers of the BC GLAM Symposium from the BC Museums Association, the BC Library Association, and the Archives Association of BC! It was a great programme this year and my only feedback is that I would like to see this event extended to two days. See you next year!