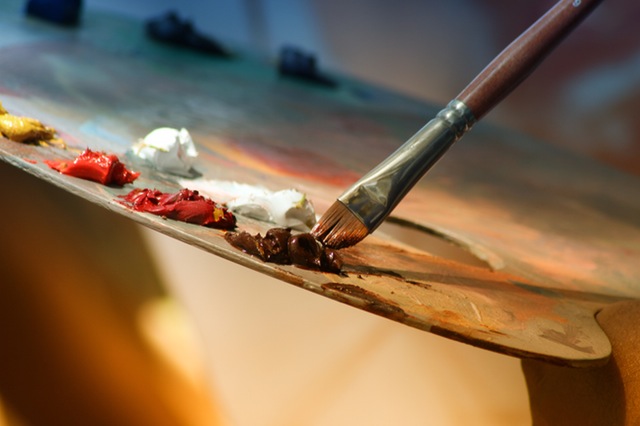 Archivists often complain about a lack of everyday awareness of our profession and the societal importance of preservation and access to recorded memory. I am the first to lament the blank stares I get when I say I am an archivist (see more thoughts on this issue here).  But I was reminded recently that it isn’t just academic researchers who are aware of the magic of the archives. There is another group that deeply values archival records – using them to comment, critique, engage, and inspire. They are the social commentators, the remixers, the visionaries, and the mouthpieces of their various mediums. They are the painters, the photographers, the song-writers, the print-makers, the performers. Artists use archival records in ways we may have never considered, bringing new meaning and breathing new life into the records we preserve.

“Archives are all the rage”

In 2014, Artspace wrote that “archives are all the rage in the art world these days.” It would seem that “the idea of the archive continues to be an undeniable force and organizing structure in exhibitions.” Where have you ever seen anything written about archives like that?! It certainly brings a smile to my face and inspires me in my work.

I thought it would be interesting to explore the connections between art and archives and see how artists are using archival records as inspiration and/or directly in the work itself. According to Artspace, artists are using archives to build constructs around invented characters, to pay homage to historical figures, to fuel discussion, and to interrogate the state of the world.

Oft-quoted in articles about this subject, Hal Foster’s 2004 October article, “An Archival Impulse,” explored the work of three artists who make use of archives in their work. He explained that “archival artists seek to make historical information, often lost or displaced, physically present.” Perhaps this is not what archivists would like to hear – we tense at the concept of “lost” records (see this blog post that provides a useful summary of a recent debate on “archival discoveries”)

However, Foster’s point is that artists bring historical information to the fore by presenting it in new, thought-provoking ways.  And they seem to think about archives in a completely different way. Foster even suggests that perhaps a better term for this trend would be “anarchival impulse” as the artists he features are “often drawn to unfulfilled beginnings or incomplete projects – in art and in history alike – that might offer points of departure again.”  Perhaps artists would rather see the unprocessed materials rather than those that have been arranged and described. Something to think about, anyway.

Four years after Foster’s article was published, the International Centre of Photography presented an exhibition of the work of a variety of artists that use archival documents in their work. The show, Archive Fever: Uses of the Document in Contemporary Art, featured “works by leading contemporary artists who use archival documents to rethink the meaning of identity, history, memory, and loss.” The New York Times called it a “brain-pincher of a theme show.” Instead of focusing on making the archives physically present, the artists featured in Archive Fever were shown to be rethinking and manipulating the historical record to find new meaning. As the New York Times review explained, “art, which is in the business of questioning facts, takes manipulation as a subject of investigation. And certain photographers do so by diving deep into the archive to explore its mechanics and to carve their own clarifying archives from it.”

Artists question content and manipulate to find meaning. This is not what we understand to be a traditional use of the archives, but it does suggest there is a user group out there that we may not necessarily be thinking about when we are arranging, describing, and making records available.

Archives in the key of G

Some years back, I was introduced to the work of Emily Millard (formerly known professionally as Miss Emily Brown). With her haunting melodies and delicate voice, she tells stories with her work. After finding success with her first album, she was awarded a Canada Council for the Arts grant to write her second album, In Technicolor. Millard used her grandmother’s wartime journal as inspiration for the album. She describes the inspiration and writing process on her website:

“One of the most precious objects on the bookshelf growing up was the journal that my late grandmother Leanora wrote during the Second World War. She was twenty-five years old, working as a stenographer with the Canadian Women’s Army Corps in London, England. Newly wed to my grandfather Eddie, an aircraft fitter in the north of England, she kept track of the letters they sent back and forth, as well as the events and experiences of her daily life between January and June of 1945. Leanora’s journal is at the heart of this collection of songs. What began as an exploration of my grandmother’s life led to a wider study of femininity and independence during wartime and the effects of post-WWII modernization on the health of individuals, families and communities in Canada.”

For a taste of the album, check out “The Diary of Amy Briggs”

Chrissy Poitras and Kyle Topping are artists who run SparkBox Studio – a studio and residency program in Prince Edward County, Ontario. Their vision includes “bringing art outside the studio and into public space through off-site projects such as public installations, outdoor exhibits, and youth outreach programs.”

Their most recent exhibit, in partnership with interior designer Alex Fida, explored the connection to place, while addressing the theme of exploration. They used print sources and archival maps to inspire the overall theme and concept of the piece, which included a prospector’s tent as the main structure, with paintings and prints related to exploration, discovery, and how people relate to the place they are from. According to Chrissy, “artists are interested in story-telling and creating visual narratives. Archival material plays a big role in keeping stories alive and accessible.”

In addition to producing their own art, Chrissy and Kyle offer artists the opportunity to live and work at the Spark Box Studio through a popular artist’s residency program. It is a concept that is gaining traction within archives as well.

In 2013-2014, the City of Portland Archives & Records Centre welcomed its first artists-in-residence and the following year, Kathy Carbone offered an ethnographic reflection of the experience in Archivaria 79. The article is meant to be the first in a series wherein Carbone expands on her research questions. Among other questions, this first article looked at “how the artists are conceptualizing, creating, exhibiting, and performing literary/art works with archival records.”

The goal of the City of Portland Archives’ program was to enable “artists to create work in any media that engages and/or is a result of working with the archive’s collections and archivists.” According to Portland’s City Archivist, Diana Banning, the desire to create the program came “from the desire to open up the archives to people other than the archive’s traditional users, to reach out to the community, and to view the archives through a different lens.”  The quotes in the article from Banning really resonate with me, with regard to bringing new audiences to the archives and finding new ways of engaging with the historical material.

She explained to Carbone that the archives had been engaging with artists much in the same way as it had engaged with genealogists and historians, what she refers to as “mining the collection to support the work that they’re doing.”  What she wanted, and what I find really interesting, is a true collaboration between the artists and the archives, whereby the artists become “ambassadors for the collections.”

The two artists, Garrick Imatani and Kaia Sand, worked with the Portland Police Bureau’s surveillance files and worked with the archivists to gain an understanding of the context of creation. They saw their work contributing to the story of these official records, “a way to talk back and infuse the official with the voice that was unrepresented.” Through the residency program, the artists were able to follow threads through the records and be inspired to go where the records took them. They were given unfettered access and could thereby fully engage with the materials over time. Carbone concluded that the products of the residency “originate from the myriad ways the artists are resonating with and responding to the historical and sociocultural contexts, contents, and/or physical structures of the records.”

Personally, I find this whole process fascinating! The artists are clearly engaging with the archival records rather than simply using them for illustrative purposes or as support for an already established conclusion. I am particularly struck by how the records took on new meanings and enabled the creation of “an alternate history of Portland activism and civic engagement.”

There have also been residencies in the archives of the London School of Economics and the BBC and BFI hosted a series of workshops for artists back in 2012 as part of an ongoing ‘Artist in the Archive’ project.

More recently, the Corner Brook Museum and Archives in Newfoundland was seeking an artist-in-residence, with the aim of fostering “an enhanced education experience for the public through the unique perspective and interpretation of the artist.”

I have been fortunate to work with a handful of artists to bring their vision to life using the records in the archives. Seeing what they were able to create with the records was a joy for me. I hope to be able to share their impressions of working with archival records in a future blog post.

I am excited by the prospect of having artists as archival clients. Artists are capable of questioning, investigating, and seeing the world differently. These skills can be extended to the analysis of archival records and artists can bring this different perspective to the archives. This different perspective may, in turn, enhance the experience of the collection for all patrons.