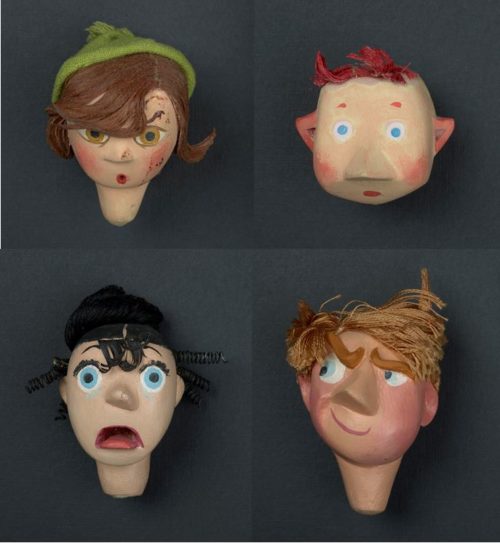 Like so many others, I have been binge watching Game of Thrones recently, so I acknowledge that part of the inspiration for this post came from the concept of the Many-Faced God. I don’t presume to understand all of its subtext, but the idea of being whoever (or whatever) you need to be for a given situation, resonated with me. This is probably where the analogy ends though, as Arya was learning to be a silent assassin, while archivists are learning to be rounded professionals, capable of bringing many perspectives to their work.  The comparison still works though, right?

While attending the ACA annual conference this past June, I started to get overwhelmed by how many different specialties I was supposed to have as a professional archivist. During the final keynote, I posted the following to Facebook:

I posted this in a moment of frustration that I was never going to be able to live up to the expectations of my profession. I know that there is no way I can be all of these things simultaneously- at least not in any real way. I can dabble, I can inform myself, but I will never be the expert in all things that sometimes I feel I should be. Conference presentations inspire me, but they also make me tired and sometimes quite ashamed that I am not better informed, or more capable.

However, since then, I have decided to take a much more positive view of this whole thing. This is because I have a sneaking suspicion that what I have hit on here might just be why, out of all my friends, the archivists seem to be the ones who are most satisfied with their jobs. They also often do archivy-related things in their spare time, like volunteer for associations, organize their family records, write a blog – or sometimes all three!

I think this is evidence that variety really is the spice of life and archivists are living proof. While it can be overwhelming at times, the archival profession presents opportunities for lifelong learning and I think this is what leads to satisfied professionals. Our job is all about context and this means that we are able to bring many perspectives to a single issue and many facets to our work. Not everyone will have all of the skills, but acknowledging that we should be thinking about them in our work ensures that we remain open to different perspectives and are able to bring different lines of inquiry and theory to bear.

I thought I would highlight some instances where archivists are successfully wearing some of the important faces that initially overwhelmed me (hmm…that sounds a bit creepy, but hopefully you get my point).

So apparently, according to Harvard, the data scientist is the sexiest job of the 21st century!  Who knew? The Librarian (and by extension, the Archivist) has traditionally been the subject of sexual fantasies (though I still don’t really get the glasses on the bridge of the nose thing…it’s just uncomfortable wearing them like that!). So what happens when you combine the two sexiest professions?  Now I am picturing a Magic Mike style film where bespectacled archivists present visualizations of unstructured data, with Ginuwine’s Pony playing in the background. You’d watch that, right?

This University of Texas paper, “Visualization for Archival Appraisal of Large Digital Collections,” opens with a particularly apt quote from Richard Cox, who explains that we need to “look at a vast universe of documentation (and a universe that is expanding quite rapidly) and then to shrink it down in some strategic, planned, or rational fashion that allows archivists to administer it and researchers to access it.” The answer that archivists are starting to turn to is data science.

The authors of the study explain that data visualization allows us to see patterns and compare and contrast information. They were able to make sense of a large amount of data without finding aids. They found that their approach was “especially fitting to show general trends in the data as well as to detect anomalies.”  By manipulating the data using visualization features, they were able to suggest a number of ways that appraisal can be facilitated. It’s too much to include here, so check out the paper if you’re interested. Unsurprisingly, there are some great diagrams that help to explain their findings!

This is definitely an area where I would love to say I shine (I don’t unfortunately…yet), but I am supremely impressed by those who can combine their tech skills with traditional archival practice to make digital archiving magic. Misty De Meo is one such person and she has done a much better job than I could at describing being two things at once, in this fantastic post entitled There and Back Again. This is also a great piece about gender in computer programming- an important discussion.

I also love the idea that Misty saw a gap and decided to fill it by bringing her original programming passion to her archives job.  “There’s no actual expectation that digital archivists can program, but it didn’t take me long to realize that a lot of my analysis work could be sped up if I could just learn to automate it. So I taught myself some basic Ruby scripting, caught the bug, and gradually taught myself more.”

I doubt that Melanie Delva ever imagined that one day she would be standing in front of a room full of fellow archivists on their feet, applauding her courageous recounting of her experience with the Truth and Reconciliation Commission. I also doubt that she would have ever guessed that her archival career would include bearing witness to stories of unimaginable cruelty and consequently suffering from vicarious trauma. This is not something archivists are prepared for, though it is a very real possibility in our work. It’s something that we need to be talking about.

The TRC process has profoundly affected archivists all over Canada and has left an indelible mark. If you were not able to attend the most powerful conference session I have ever witnessed (which also included thought provoking and emotionally challenging presentations by Anna St. Onge and Rebecka Sheffield), you can hear Melanie talk about her experience here and you can read a sermon she gave about it here.

It was a treat to hear Jarrett M. Drake speak at ACA 2016 about the topic of archivists as activists, or as he prefers to think about it – active archivists. The speed at which he was able to establish ASAP: Archiving Student Activism at Princeton is commendable. He saw a gap in Princeton’s archival collection and created a program to fill it. Anyone who knows me would know I would find that kind of efficiency impressive and exciting. I typically want everything to be done yesterday. This seems to be a theme in Drake’s work. He is efficient, outspoken, challenging, and effective.

He participated in the creation of the People’s Archive of Police Violence in Cleveland. He advocates for the creation of community-based archives as opposed to traditional archival repositories to document social movements like #BlackLivesMatter. He created the hashtag #ArchivesforBlackLives and he inspires others to organize and make an impact. See, for instance, this collaborative statement from a group of Philadelphia-area archivists. He generally blows things up (metaphorically speaking) and uses his speaking engagements to provoke action from his colleagues and peers.

And let’s not forget…

A girl has desires (Game of Thrones again)...to bring perspectives from different fields

I find these people incredibly inspiring and I am so thankful that they have presented their ideas at conferences and written about them so eloquently. They have encouraged me to think differently about my work and how it can be improved by perspectives, theory, and professional practice from a large range of fields. Rather than be overwhelmed, I am now choosing to be emboldened by the need to be the many-faced professional.

4 thoughts on “Archivist: The Many-Faced Professional”