It started in the minds of students at UBC’s School of Library and Archival Studies as a modest student symposium. In the ten years since the inaugural ACA@UBC, it has blossomed into the thought-provoking two-day international symposium that students and professionals alike look forward to every February.

This year’s theme, “Unresolved: Balancing Access and Privacy in a Digital Age,” brought together a wide range of professionals and filled the Frederic Wood Theatre at the University of British Columbia. The symposium explored the tension between maintaining privacy and providing access. The symposium sought to answer the following questions:

“How can the societal need for documentary evidence of facts and acts be reconciled with individuals’ and groups’ need to restrict access to their information and information about them? How can the records and archival profession navigate between these conflicting needs?”

While I find that professional meetings such as this one tend to ask more questions than they answer, I do find value in the discussion. I especially appreciate the diverse international perspectives that are presented each year at this particular event. I only attended the symposium on Day Two – preferring to leave the discussion portion to the students who are then able to engage more meaningfully with the presenters. I do wonder, though, why the days are not reversed. Surely the students (and any professionals attending both days) would get more value out of being able to discuss what was said in the traditionally formatted presentations the previous day. My two cents.

The day was ambitious with nine presenters including professors, lawyers, public servants, and consultants. Jim Suderman from the City of Toronto kicked off the day by taking the crowd back to “the good old days,” when archival clients tended to be historians or genealogists who conformed to access requirements and understood the value of the records professional. Suderman provided a timeline of the changing access world from the explosion of demand for records spurred by the publication of Alex Haley’s Roots, through the founding of the Internet Archive and Google, leading to the exponential explosion of potential clients demanding free (as in liberal, but likely financial as well) access to information. We collectively believe that open data is a public good, that it drives the economy, supports transparency, and  ensures accountability. BUT – we don’t really know what it’s being used for. Instinctively, we feel that it can be used in ways we simply aren’t envisioning – yet. Suderman wonders whether we should be thinking about how data will be used before creating the systems and structures that create the data?

Pierluigi Feliciati from the University of Macerata discussed the implications of the new EU data protection regulations (GDPR 2016/79). He explored the desire to create a balance between access and privacy rights. The GDPR aims to create an easier exchange of data while protecting the personal data of natural persons, respecting the ‘right to be forgotten,’ – an oft-discussed concept in archival theory seminars, but never before enshrined in legislation. Feliciati discussed the need for privacy by design, given that GDPR requires that consent is always explicit and revocable. GDPR will require a complete rethink of workflows and graphical user interfaces to ensure that the central tenets of the regulations are respected; that data is protected, portable, and the public is notified of breaches. 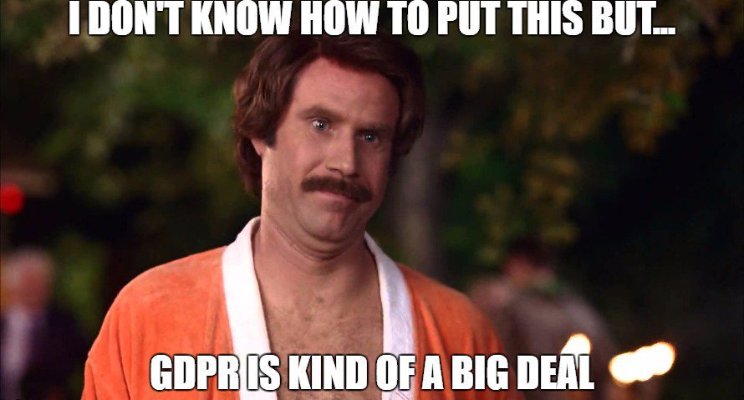 Of particular interest is Article 17, the Right to Erasure, which stipulates that natural persons have the right to have their personal data erased when it is no longer required for the purposes in which it was collected. While this right appears to have devastating consequences for the archival record, it is tempered by a wonderfully vague caveat that it does not apply for archiving purposes when the data gathered is in the public interest, or has scientific or historical research value. I suspect this will be a clause for the courts to debate before we have guidelines on what exactly is “in the public interest.” Feliciati echoed a concern that we have been hearing over and over again in the conversations about data science – that archivists are not involved enough in the discussions surrounding the GDPR. It remains to be seen how this new regulation (coming into force May 25, 2018) will shake down and what impacts it might have on this side of the pond.

Jason R. Baron, former Director of Litigation at the US National Archives, spoke to the group about ways in which sensitive content might be isolated to enable greater access to the historical record. He explained that in the United States, privacy is trumping (no pun intended…maybe) access. The exponential growth in records creation in the 20th century followed by the explosion of data in the digital age has meant that archivists can no longer cope in the traditional ways. Archivists need to embrace AI technologies in order to make use of advanced search methods. Think less about cute little boy robots and more about crawlers searching through terabytes of email communications.

This is a problem that Baron is very familiar with, having been a central figure in the US Capstone project that permanently maintains email from only top level officials. In his talk, Baron suggested that any kind of computer-assisted review was going to be an improvement over current (broken) processes for access and discovery. He implored us to put our faith in analytics and ranked algorithms. They may not be perfect, but we can’t do it alone.

I’m pretty cool with algorithm bots that would make our job easier. But…well…then the day got spooky and Jean-Francois Blanchette from UCLA scared the pants off the crowd. Move over Black Mirror, reality is taking over. Until the ACA@UBC this year, I was under the impression that “predictive policing” was safely ensconced in the sci-fi genre as depicted by our friendly neighbourhood nut job, Tom Cruise.

Apparently, not anymore.  Blanchette introduced us to AXON, your friendly neighbourhood taser manufacturer come body cam and cloud storage provider. Below is a legit promotional video for this company and its line of products, which include its cloud storage service called evidence.com

Apparently, the end goal is real-time event detection a.k.a. real-life Minority Report. Axon is providing free body cams to US police forces so that it can eventually mine the data to develop this video analysis technology. This situation is effectively a records nightmare. If police forces (public entities) are creating thousands of hours of footage (public records) where is the ethical line? How is access given to these records? What happens with the footage that is deemed not to be evidentiary? What kind of retention should be applied? Should public records be housed in proprietary cloud services like evidence.com? Apologies for the militaristic terminology, but this is a records mine field! Blanchette’s presentation will be swirling around in my head for a while. Yikes.

I will conclude with an uplifting and hopeful tweet to get myself off the proverbial ledge.

Luciana Duranti concluded the day by reminding everyone to save the date for next year’s ACA@UBC Symposium. Consider it saved.

I want to echo Jennifer Douglas and say a hearty congratulations to all the student organizers of this year’s symposium. I was intrigued, inspired, and even a little spooked. I think that means it was a success.