Another year older and another ACA@UBC in the books. Congratulations to the students at the UBC iSchool for another great day out of the office, chit-chatting with other archivists, and learning about archival practice around the world. This year’s theme was “From Accountability to Memory: The Duty to Document, the Right to Destroy, The Need to Preserve” and the day’s talks focused on exploring how the “profession can develop strategies of accountability in an increasingly digital and politicized world by employing both fair and contested practices, and learning how individuals can gain and take part in those practices.”

The day began with the standard greetings and opening remarks from the Director of the UBC iSchool, Dr. Luanne Freund, who is now a familiar face at this event. She made a comment that stuck with me throughout the day, to the effect of “how do we hold institutional needs and emotional needs in balance” when it comes to archives and recordkeeping. It is the constant tension. It helped me to keep this idea in mind as we explored the realities in large institutions around the world. To remember that behind all of the policies and legal frameworks, ultimately, records are about accountability and memory.

A rare treat at this year’s event was a preview of the forthcoming soon-to-be-Oscar-nominated documentary short “Duty to Document,” presented by Darrell Evens (Canadian Institute for Information and Privacy Studies). The film was produced by the Canadian Institute for Information and Privacy Studies, InterPARES Trust, and the Capilano University Documentary Unit. The documentary highlights how important the proper creation and maintenance of records is to the fundamental workings of democracy. It outlines the development of the Duty to Document that is now prescribed in BC law. Elizabeth Denham’s quote in the film essentially sums up the main idea…”If we fail to document, citizens are cut out of the role they play in democracy in terms of good governance and accountability.” The best part of seeing the documentary at the event was the meta-moment captured by Andrew Ross as Professor Luciana Duranti watched herself on the big screen.

As if it was planned, Susan Laidlaw (British Columbia Government Records Service) followed the documentary with her presentation about the BC Government’s experiences with implementing the Duty to Document. 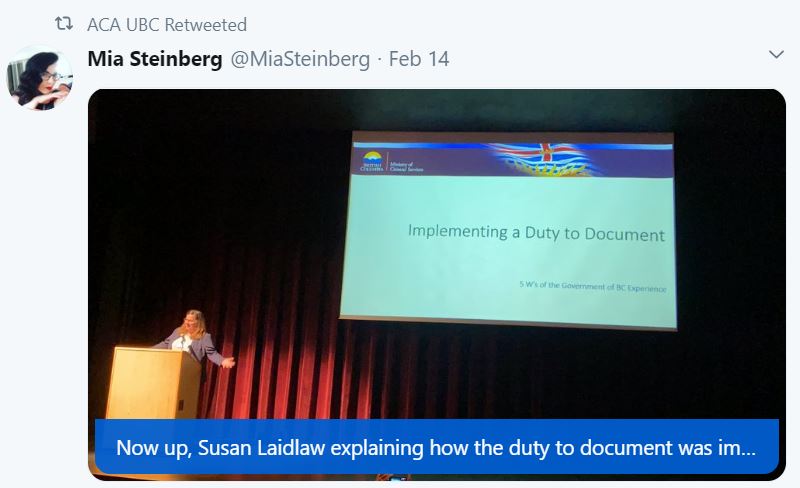 Laidlaw made a good case for the benefits including openness, transparency, and informed decision-making. The 2019 amended Information Management Act introduces the requirement to document government decisions. It blows my mind that this is something that needs to be cemented in law, but here we are. The end of the sticky note. Laidlaw outlined when a decision should be documented and what constitutes an adequate record, which are both valuable definitions that I think would be quite useful in other jurisdictions, so I think they are worth stating…

When should a decision be documented?

What is an Adequate Record?

Andrew Ross (Library and Archives Canada) provided a historical overview of the evolution of appraisal at Library and Archives Canada. Prior to the 1990s, appraisal was done at the point of transfer when government records made their way to the National Archives. They were examined for their research or secondary value and maintained or discarded. The advent of macroappraisal (most famously attributed to the late Terry Cook) focused on the context of creation as the focus of appraisal, with a view to documenting the impact of the federal state on Canadian society. Following some dark days at LAC with questionable (and let’s be honest, destructive) leadership (I was there…I remember…) the Disposition and Discoverability Task Force was convened to deal with the extreme backlog created by the lack of disposition authorities issued to government departments. The Task Force “pushed macroappraisal to the limits” which resulted in a series of high level disposition authorities that sought to strike a balance between coherence and flexibility. You can read a lot more about the changes to government records appraisal at LAC in “Everything Old is New Again: The Evolution of Generic Appraisal at Library and Archives Canada” by Rebecca Giesbrecht and Jenna Murdock Smith (Archivaria 84 (Fall 2017).

Next up, Andrea Riley (National Archives and Records Administration) pointed out the giant elephant in the room (a.k.a. electronic records) and outlined the ways in which NARA is trying to prepare for the move to accepting only digital records from government institutions after 2023.

It is a bold proposition, and one where the details haven’t quite been worked out yet. NARA is experimenting with the Capstone approach to email (more on that here) and it seems that 68% of government agencies are using it or some hybrid form. The transition to electronic records will include digital only recordkeeping as well as requirements for the digitization of permanent records (to come) and requirements for the digitization of temporary records (already in place).

To round off the morning, we got the UK perspective on digital transfers from Paul Young (National Archives UK), charming the crowd with a photo of his cat, a Wall-E still, and coining new phrases like “digital heap” to describe the 1000 TB of digitized material, 160 TB of archived web content, and 28 TB of born digital material that forms the collection at the National Archives UK. 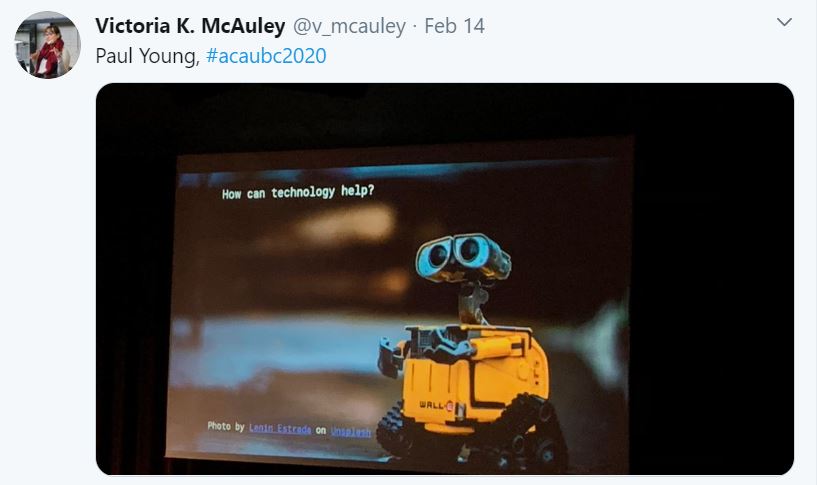 Young discussed the inherent scalability issues with digital when you try to recreate paper processes in the digital realm. He encouraged us to embrace the messiness of digital and experiment with tech to help sort it all out, which his team is currently doing. They are using tech to extract meaning from records, to classify data in groups, and they are determining if they can use AI for selection. They are evaluating five commercial AI products and training them with their own data – teaching the system to “select” and “don’t select.” Young noted that it is important to recognize bias in training these AI services and they are investigating how to explain algorithms. Really, its all about cultural change and moving away from replicating the paper world. The National Archives UK will be undertaking projects to transfer digital records with a focus on cloud-based tech, integration with their TDR, no software tools to download, and a more automated system. I look forward to hearing more on their progress in the years to come – especially when it comes to automating the process without forcing clients to download tools, which always feels like a major impediment to uptake.

Totally unrelated to archives, but I finally got to try one of the famous BlueChip cookies I’ve heard so much about from UBC students…and  they did not disappoint! The marbellous cookie blew my mind and put me in a sugar coma for the afternoon.

Dieter Schlenker (Historical Archives of the European Union) started off the afternoon. Through my cookie haze, I learned about the establishment of the EU Archives in 1950 and the subsequent creation of the Historical Archives in 1984 located at the European University Institute in Florence, Italy. You might be surprised that the archives is located so far from the epicentre of EU governance but that was intentional. The aim was for the historical archives to serve as a research hub and so the university setting seemed fitting. The Historical Archives houses the records of EU institutions and agencies as well as the private papers of prominent political groups, movements, associations, and individuals. Records are appraised by the creating institution and then transferred to Florence after 15 years to be opened to the public after 30 years. There are 10 archivists employed in Florence who are responsible for processing and guiding researchers through reference services. My favourite part of Schlenker’s presentation was how he described the archives…because of its vast size and coverage of 23 languages.. “you never find what you’re looking for but you find a lot of things.” Love it! If you’re looking for me, I’ll be getting lost down rabbit holes in the EU Historical Archives.

Prisca Giordani’s presentation was well-placed after Schlenker’s as it dealt with the records of an EU agency. She fought to change the retention and disposition of the records of the European Anti-Fraud Office (OLAF), which detects, investigates, and stops fraud related to EU funds. When Giordani (now with the International Monetary Fund, but previously with OLAF) discovered that all case files were scheduled for destruction, she decided this was completely wrong and she decided to take up the fight to get it changed. She presented her concerns in 2013 (prior to any destruction actually taking place) and it was years before she was able to convince the higher-ups that the disposition rules needed to be changed so that the records would eventually be transferred to the Historical Archives in Florence. She was not able to reveal details of the internal discussions, but she was pleased to report that she was successful. The files now have a 15 year retention and are scheduled for permanent preservation – “a better decision in the best interest of EU citizens.”

Following the dream digi-pres scenario was Matteo Manfredi (Universidad Andina Simon Bolivar) to discuss the RIPDASA project – the Ibero-American Network for the Digital Preservation of Audiovisual Archives. The project aims to identify, analyze, create awareness, and promote sustainable digital preservation alternatives for sound and audiovisual documents to reduce the risk of loss. The project’s first deliverable was a fascinating interactive map showing the location of all audiovisual collections that are in varying states of preservation and risk. The map allows users to analyse the potential risk factors including earthquakes and floods.

Lastly, we heard from Adrian Cunningham (Retired – National Archives of Australia) who hit us with some pearls of wisdom, not least of which was “perfection is the enemy of success.” Cunningham provided an overview of Australia’s experience of changing the appraisal process for government records. He lamented the fact that he does not feel the initiative has been successful, not because of any inherent theoretical flaws, but because of how it was operationalized and enforced. Appraisal was radically redefined, rooting it in business process analysis to determine which records needed to be created and kept. This was a complete reinvention of appraisal practices in Australia. However, the people expected to conduct the appraisal have no training and are expected to do defensible work. He believes this leads to resentment and avoidance, or in his poignant words, “a downward death spiral of mutual mistrust between agencies and archives.” Cunningham believes the laws are too vague to ensure any kind of enforcement and are regarded as advisory rather than mandatory. The Archives is left only with a carrot (authorization of destruction) to encourage compliance and can only rely on naming and shaming, monitoring rather than enforcing. He believes an independent organization needs to be given the stick- to be the bad cop – so the Archives can be the good cop in the scenario. 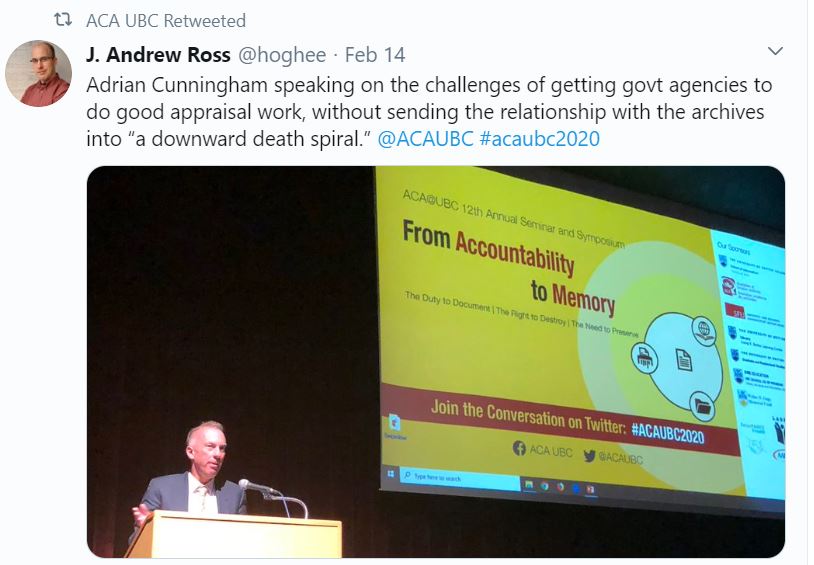 And there you have it. Another successful ACA@UBC complete. Congratulations to the student organizers and faculty advisor, Dr. Duranti.

All of this theoretical and practical archives talk has me excited for what’s to come at the annual conference of the Association of Canadian Archivists. The theme is 20/20 Vision: Seeing Archives Differently and the conference is happening June 10-13th at the University of British Columbia. I am totally biased (as the Program Chair) but I think it’s going to be a stellar conference! More details here. Check out the sessions and plenaries in the Conference At-A-Glance. Registration opens MARCH 1st!!

2 thoughts on “ACA@UBC 2020 – From Accountability to Memory”